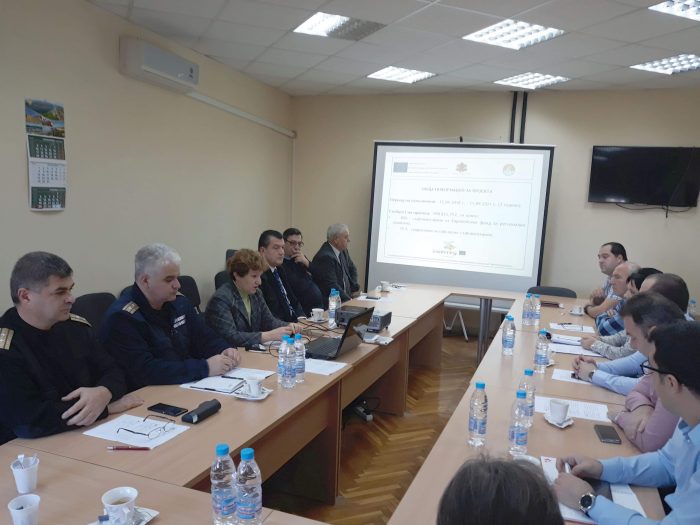 Thanks to cross-border project between Bulgaria and Romania that has been launched, initiated by the Municipality of Tutrakan, called “Joint Volunteering for a Safer Life”, the first in Bulgaria and on the entire Balkan peninsula Center for Training and Preparation of Voluntary Formations in Bulgaria and Romania, will be built. The project aim is to help the state institutions to protect the population in emergency situations and disasters.

To announce that representatives of the four partner countries in the project attended the first press conference, that was held at the municipal administration in Tutrakan on November 27th. The municipality of Tutrakan, as the leading partner of the project, was represented by the mayor Dr. Dimitar Stefanov and the project manager Valentina Hristova, as well as the officers of the municipality, the mayor of the village of Belitsa Kostadin Manov, where the center will be built in part of the former school. The second partner in the project was presented by the head of the International Projects Department in the DG “Fire Safety and Protection of the Population”, Ministry of Interior, Julian Grancharov and by the Head of the Regional Fire Service in Tutrakan, Darin Mitev and his colleague from Silistra. The third partner is from Romania – the Romanian General Inspectorate for Emergency Situations, which was represented by three employees, led by the project coordinator Marian Ilie from the Romanian side.

The fourth partner in the project is the National Association of Volunteers in the Republic of Bulgaria (NAVRB), whose chairman Ivan Videlovski has participated in the press conference.

The Mayor of Tutrakan Municipality, Dr. Dimitar Stefanov, emphasized the importance of the project and specified that the contract for its financing had already been signed. The total cost of the project is EUR 998 815.75, with 85% of this amount coming from the European Regional Development Fund and 15% from national co-financing and own funding. Mayor Stefanov wished success to the project, which will be realized within three years – until September 2021.

The project manager Valentina Hristova made a presentation of the whole project, explaining in details how the project will be managed, what activities will be carried out and how the future volunteer training center will operate in the Municipality of Tutrakan – Belitsa village. The first priority of the project is to investigate the risk in the cross-border region in Bulgaria and Romania. Amongst the main activities of the project is the construction of this training center, which is planned for the period of January 2019 – August 2020. The training itself is planned from September 2020 to August 2021, which will involve 144 Bulgarian volunteers and 72 Romanian. There will be six training sessions for 216 volunteers in Tutrakan, two sessions for the best volunteers from both countries – in Constanta, where there is a professional training center.

Ivan Videlovski, the chairman of NAVRB answered the question “How will volunteers be selected for training at a later stage of the project?”, posted by the newspaper ‘Progress”. In his response he specified that there are about 3 000 volunteers in Bulgaria, but not everyone can be a volunteer, because they must be physically and mentally resilient to help state security and order authorities  in difficult situations. Furthermore, only registered volunteers will be trained.

The representative of the DG “Fire Safety and Protection of the Population”, the Head of the International Projects Department, Julian Grancharov, said: “It is good that a training center for volunteers will be built, because there is no one on the entire Balkan Peninsula”. Mr. Grancharov added that in neighboring Greece there is no tradition in volunteering, and it is possible that its representatives will be trained in the future in the Bulgarian Center, which will be on the territory of Municipality of Tutrakan. In fact, this Center will be of strategic importance and with the opportunity to coach volunteers from neighboring countries, and why not from other European countries. Thus, even after the Tutrakan Municipality project finale, the Volunteer Training Center will acquire its sustainability, with capacity up to 40-50 learners at once. Belitsa village will be able to revive more.

For both counties, Bulgaria and Romania, is difficult to find volunteers, who can deal with specific situations. This was also made clear by the chairman of the NAVRB, Ivan Videlovski, and by the project coordinator of the Exceptional Inspectorate Situations in Romania, Marian Ilie. Thus the project of Municipality of Tutrakan may be ahead of time and gives the opportunity to strengthen volunteering in the two countries along the Danube River – Bulgaria and Romania.

The content of this website does not necessarily represent the official position of the European Union. The initiators of the site are the sole responsibles for the information provided through the site.